First DEFCON – first crypto village CTF! Unfortunately, this was the only puzzle on which I managed to make any progress. I only managed to get as far as I did with the help of some awesome people hanging out in the crypto village. In the end, I couldn’t puzzle out the key… but I did manage to solve the bulk of the puzzle. Thanks, Darío for convincing me to do this write-up! 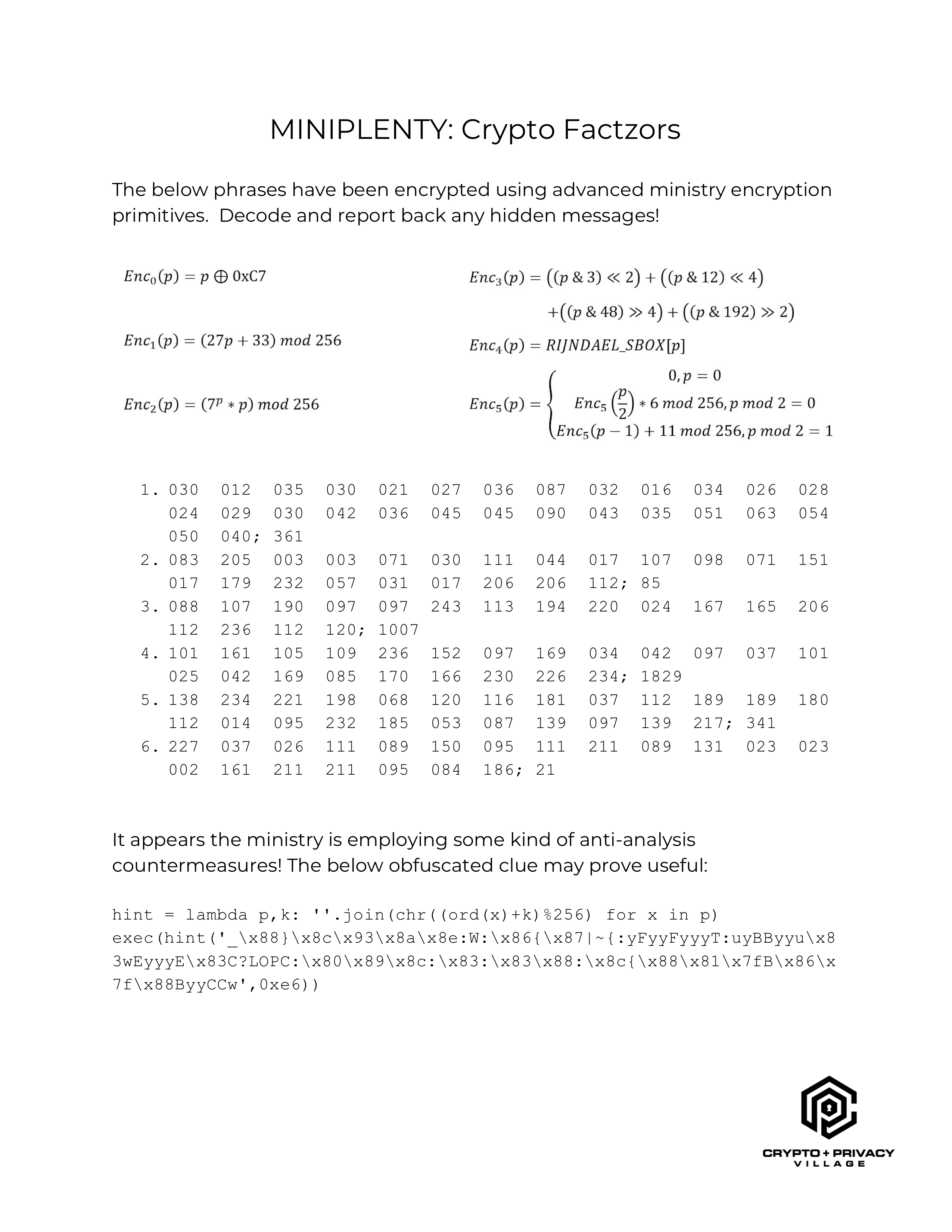 The prompt of this puzzle reads:

The below phrases have been encrypted using advanced ministry encryption primitives. Decode and report back any hidden messages!

There are six groups of cipher text, which are each apparently lists of decimal encoded bytes, with a terminating semicolon and another trailing number:

The final clue is the text at the bottom:

It appears the ministry is employing some kind of anti-analysis countermeasures! The below obfuscated clue may prove useful:

And the following obfuscated python code:

I evaluated the first line in the python3 interpreter to define the hint function, then evaluated only the argument to the exec call – just to see what hint outputs. It turns out to be the text of a lambda expression:

Based on the name of the variable the lambda expression is stored in, this appears to be the function with which the above cipher text was generated! Score!

The first argument to the expression appears to be a callable, the second argument a sequence, and the third an integer. So, the Encrypt function appears to take some cipher function, the clear text to encrypt (as a bytes object or as an array of integers), and a key.

Clearly, to decipher the messages, I need to reverse not only the Encrypt function, but also each of the given cryptographic primitives – which I assume are the callables supplied as the first argument to the function.

Then, I tried to puzzle through enc1… and got nowhere. A very smart person sat down next to me in the village and taught me about rings and fields – and we eventually found the Wikipedia page on the Modular Multiplicative Inverse.

We decided to try to use Euler’s theorem, which defines the modular inverse as a ** (φ(m) - 1), where φ is Euler’s totient function, a is the coefficient we’re trying to invert, and m is the size of the ring. According to the wiki, this holds only if a and m are co-prime (sharing no common factor except 1). Again, according to the wiki:

Euler’s totient function counts the positive integers up to a given integer n that are relatively prime to n.

Given how hard (for me) the second function was to reverse, I decided to try something more in my wheelhouse: shuffling bits! enc3 shuffles the bits of the input byte according to the following diagram:

The inverse is simple to derive:

enc4 is simple as well, as the Rijndael S-boxes are well known. See the Wikipedia article.

Now we’ve run out of easy work to do, and I didn’t want to get into learning about discrete logarithms, so I applied the first principal virtue of programmers: laziness! That same smart person that taught me about rings pointed out that the space we’re searching is tiny, and that these hard problems can be reversed with a lookup table. Therefore:

Next, reversing the Encrypt function gave me a bit of trouble. It took an embarrassing amount of time for me to realize that the operations not only had to be inverted (e.g. addition becomes subtraction), but also that they had to be applied in reverse order!

I reasoned that the trailing number after the cipher text is meant for the third argument, so I tried bytes(Decrypt(dec0, cipher1, key1)) because the output of Decrypt is actually just a list of ints, and not immediately readable to me. To my delight, out pops:

Success! I decrypted the other cipher text in exactly the same way, using the next decryption primitive for each. All the deciphered messages are below:

Unfortunately, this is where I got stuck. I’m no good at crossword puzzles, and these messages read very much like the hints to one of those… I tried the obvious words and phrases for the flag, such as cryptocurrency, bitcoin, monero, and blockchain to no avail. The prompt text says to report any hidden messages, so I tried concatenating the first letter of every message, and of every word, etc… Nada.

I never got the chance to ask anyone in the village who had already solved it, so this one will remain a mystery.

I hope I’ll have better luck next year!